Budapest was our favourite city in central Europe. We were meant to stay 2 days, max 3 and ended up staying 5 (perhaps the last 1 was due to the fact that we missed out on bus tickets to Bratislava, but you’ll hear about that later). Regardless, we had the best time and although everything definitely didn’t go to plan over and again, this didn’t ruin our opinion of this vibrant and extremely accessible city. All I’m trying to say is go there, you won’t regret it. ps. if you don’t want to hear the rambling about all our failed adventures, skip to the last paragraph for all the things to do in this fabulous city!!

We arrived at about 10:30pm and were very eager to get to our hostel which I’d booked off a whim the day before. We’d decided to go with Maverick City Lodge, which to our surprise was one of the best decisions of the entire trip. However, we did struggle slightly to find it given I’d looked up directions on how to get there back in Vienna, however to the wrong Maverick, because apparently there’s also a Maverick Hostel- you can see now why I could easily be confused..

Anyway once we got to Maverick Hostel, the reception lady was extremely kind and helped us in the right direction, adding that actually we had booked the better of the two places! Yay! And she was correct! The kind people had upgraded our female 8 bed dorm to a private double for no cost (this was only for the initially booked first two nights but still…more about that to come) and it was significantly newer and nicer than any accommodation we’d stayed in anywhere.

The next morning my friend decided to catch up on a bit of sleep- the bus trips were starting to take their toll on us both and we hadn’t even had an overnight one yet! And I committed to the Sandeman’s Free Walking Tour of the city. Another fabulous tour, not quite as good as Berlin but definitely up there! Along the way my new camera did decide to pack it in (and it never recovered) which was a slight disappoint but it didn’t stop me from taking in the amazing sites, I just couldn’t get many photos for the rest of the trip except on my average iPhone camera.

My friend joined me after lunch and I showed her a few of the sites I’d seen and we went exploring, trying to get ourselves completely lost and then re-orientate ourselves once more. We did a bit of shopping thanks to the fabulous exchange rate and called it a night.

One of the reasons we loved this city so much was our hostel. We stumbled upon some fabulous soon-to-be friends from Copenhagen one night while we were eating our dinner and having a drink or two. We ended up having a fabulous night of drinking and cards and hoped down the street to one of the many fabulously cheap bars in our vicinity which had some live Irish band playing. All in all, a great city for nightlife and just generally hanging out.

Looking back now I do regret not visiting the Budapest Baths, we heard from everyone that this was the thing to do but we didn’t bring bathing suits with us and were in no shape Kayla Bikini Body ready since we’d happily accustomed to the warming wintery food on offer everywhere.

So after our first few days and nights just generally exploring and enjoying the surrounding streets, we decided to venture a bit further afield and participate in caving- highly regarded fun and adventurous activity in this historic city. But unfortunately, on our last day in the city before departing for Bratislava by overnight bus, there were no tickets left with the best company we’d come across so we gave up this idea also. It just wasn’t meant to be.

To the far out of town bus stop we went after 3 fun but not all that adventurous days in Budapest. Tomorrow was Valentine’s Day and we were less than excited to be spending it in Bratislava but we wanted to get to Munich in the next few days and this was the only way of doing so given the bus schedule (or so we thought…). However, to much dismay we arrived at the station about an hour before the bus was to depart and THERE ARE NO TICKETS LEFT!!! Who knew most of Budapest went to Slovakia for Valentine’s Day weekend?!? After an initial panic and overwhelming melancholy that we couldn’t not only get the Bratislava but Munich also, we had to come up with plan B. One woman Eurolines woman was actually kind and helpful and alluded us to the fact that we could in fact Bus to Munich in two days from Budapest! Success finally!!

Although we lost our deposit on our Bratislava hostel, a total of about $4, we were not all that disappointed. We had another chance to fit in some last minute activities and join the Denmark boys for another night on the town; and we didn’t have to go to Slovakia. We clambered back to the fabulous Maverick City Lodge backpacks abreast and preyed they have a room for us somewhere. We managed to get two beds in a 6 person female dorm thank God and all was well again! A nice night in after a stressful few hours, we awoke the next day to the sun shining and roses on every corner, Valentine’s definitely makes it way to Budapest. 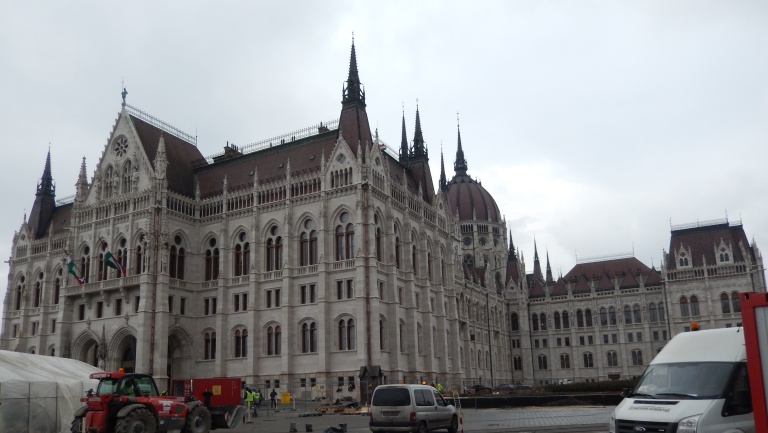 We had booked in a caving experience for Valentine’s morning, 2nd time lucky surely! Well we made it all the way to the main train station Budapest-Keleti Railway Terminal just in the nick of time to then be unable to find our bus that would take us out of town! No bus, no guide, no other cavers. We seriously were having bad luck with this city, nonetheless it was Valentine’s Day and we were determined to do something successful!

We had some delicious cake and I

The next day, all we felt like were dumplings. Australia is one of the most multicultural cities and as a result there is such an array of restaurants and cuisines available in every city all the time. But now I’d been away for about 3 weeks and all I felt like was some Asian food, my friend also was very happy to branch out from goulash and tuna cans so off we went on what we thought would be relatively straight forward and although not as simple as in Melbourne, reasonably achievable mission to find some delicious pan friend pork dumplings for lunch. Well, one of us had remembered we’d walked past what looked like a reasonable Chinese “restaurant” recently (in the past 5 days) so we began in search of this or any other Asian restaurant that may satisfy our craving. Not surprising, where we had stumbled upon this treasure we couldn’t at all recall and to much dismay there are very few Asian diners in Budapest, well at least ones we came across. About 2 hours into the search and about to give up and cry, we came across something that resembled Asian cuisine that looked reasonably busy now that it was in fact lunch time. Well their menu did have on it “15 dumplings”. We are still unsure what meat if any these contained however for the bargain price of about $3AUD we were well and truly content with what we found.

Soon enough it was time to venture back to the bus stop after another two days in this incredible city. This time we’d booked our tickets last time we were here so we knew there was going to space for us! It was a long haul overnight so we got there early and close to the front of the line to strategically try and get two seats each to be able to spread out and even sleep of we were lucky.

All in all, although nothing ever went to plan, Budapest was still one of our favourite cities of our entire trip and I will most definitely be back.

You must try Goulash for dinner with Hungarian crepes for dessert at Frici Papa, rub the bronze Hungarian Policeman’s belly for good luck, cross the Danube River on the Chain Bridge to the Castle and what is now the Hungarian Parliament, go to an ruin bar/pub or four (we went to Szimpla down the road from the hostel and it did not disappoint), eat hummus, falafel and kurtos at various street stalls, go to the Budapest baths and go caving– and tell me how it is!